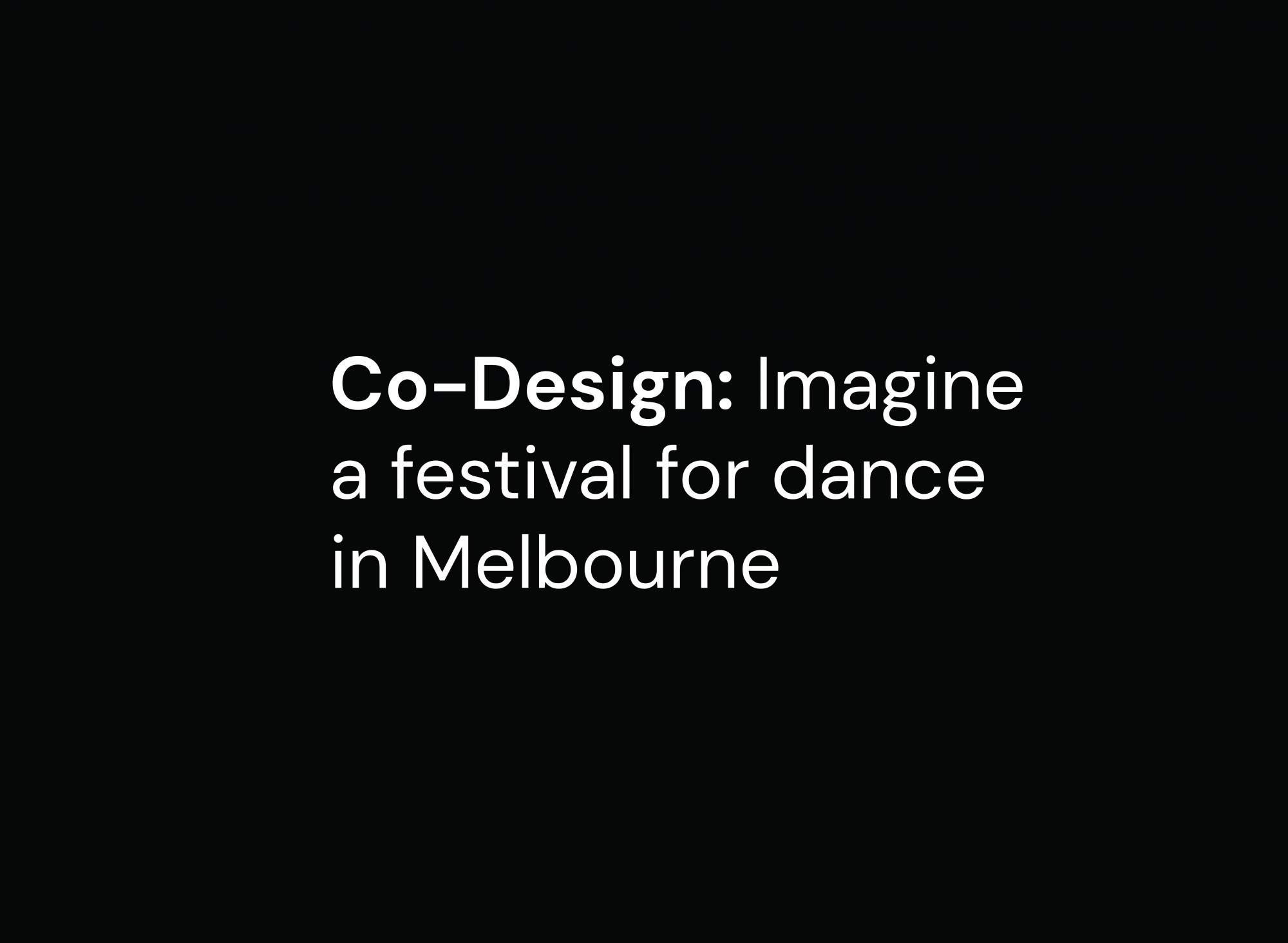 Arts House and Dancehouse are happy to share some news about the Dance Sector Co-Design, imagining a new dance festival for Melbourne.

In a time of great disruption for our community, we have been honoured and inspired by the passion and commitment of artists, producers, presenters and audiences who contributed to the Co-Design process.

Led by a team of four arts leaders — Mariaa Randall, Luke George, Priya Srinivasan and Tam Nguyen — the Co-Design involved over 373 people between September and December 2020 using a careful intersectional methodology to unearth a broad range of complex, overlapping challenges and opportunities for our dance community – and the arts sector at large. Each report is the reflection of that individual, through the prism of their experience, knowledge and practice.

This first stage of Co-Design highlights many opportunities.

It is evidence of the maturity and resilience of the Melbourne dance community, to be able to engage in deep reflection.
It is testament to the enduring love of dance by Melbourne’s audiences.
It affirms the critical importance of a presentation context dedicated to the broad and ever-changing artform of “dance.”
And it presents us with timely, important questions about transparency, shared responsibility and a broader policy for dance sector development.
Our Consultant’s reflections do not contain a panacea. This is unsurprising to us.

There is not a magic formula for a dance festival in Melbourne that leverages existing resources, creates a healthy cycle of production for new work, achieves audience development for the artform, acts as a market development site for local, national and international producers and presenters, stimulates and inspires a community and, develops the artform. From 2009-19, Dance Massive did do all those things, and it was not sustainable within current funding policies, and models of presenting organisations.

But it is also clear that the desire for a dance festival(s) remains.

As Arts House and Dancehouse, we are committed to collaboration, to artist-led decision-making models and a cross-sector dialogue that can enable a festival that enacts its values, meeting expectations for shared power and plurality. Any new dance festival will be part of an important fabric and complementary with many currently existing and emergent festivals and programs.

There’s more work to do.

Arts House and Dancehouse are initiating a series of workshops to create business models for a dance festival to be held in Melbourne in the first six months of 2023. The original Co-Design team have been invited to continue their presence in this next stage independently.

Are you a local Melbourne organisation with resources and interest in presenting the works of Australian independent dance artists in a festival conext?

We invite you to run a workshop with your dance community, large or small, to come up with business models for a dance festival that could work for your context. If you choose to participate you will be required to pay a standardised fee of $150 (per ½ day) to all artists involved.

Organisations with a national remit are encouraged to engage artists nationally.

These workshops — of duration and scale to be determined by organisations who choose to participate — must be completed by July 31, 2021. The Co-Design Artist Reflections form the backbone and context for discussions.

Representatives from these organisations alongside a paid participating independent artist, are invited to come together for a day-long meeting in late August in Melbourne. At this meeting, an independent facilitator will work with participants to identify potential models for a future festival.

Should this process reveal sufficient resources, capacity and enthusiasm to progress conversations towards a festival in 2023, we will look towards an agreement between organisations that begins planning for a festival for dance in Melbourne.

If you would like to seek more information or to register your organisation’s interest, please contact Dancehouse via director@dancehouse.com.au.

Mariaa Randall is a Gidabul, Gulibul and Yaegl dance maker from the Far North Coast of New South Wales (NSW). She is a NAISDA Dance College graduate and more recently a Victorian College of the Arts (VCA) graduate obtaining a Graduate Certificate in Indigenous Arts Management, a Graduate Diploma in Performance Creation and a Masters in Animateuring (by Research). In 2019, Mariaa premiered Same But Different at Dance Massive, presented Footwork/Technique at the Performance Space New York City, performed Painting the Dance at the inaugural Matriarchs Uprising Festival in Vancouver, and has been working with Sinsa Mansell on her new work BlACK in Hobart. She continues to create works that empower Indigenous women which include Divercity that premiered at Dance Massive 2017, HA LF her solo work, and Poetry in Motion created in collaboration with 2nd-year dance students at the VCA. Her most memorable achievements have been choreographing Jacob Boehme’s Blood on the Dance Floor and producing YAPENYA, a new Dja Dja Wurrung ceremony based on old stories. At present, Mariaa is developing her new work, SiStem. SiStem amplifies the Indigenous female warrior, the way in which Randall sees First Nations women. The work aims to showcase their strength, resilience and unwavering presence in the face of adversity.

Luke George creates new choreographic and visual work that engages daring and at times, unorthodox methods to explore new intimacies and connections between artist and audience. He sees dance less as spectacle than as reflexive practice, in which people examine themselves and their values through movement and interaction. He is concerned with relational politics, examining the dynamics of intimacy and collectivity to create ‘safe spaces’ that allow for care as well as risk. Born in lutruwita-Tasmania and based in Naarm-Melbourne, Luke creates and performs work through experimental processes with collaborating artists and the public across Australia, Asia, Europe and North America. Whether as a performer or spectator, performance for Luke takes place in active-reflective space where we witness not only our own way of being, but also that of others, to truly consider someone other than ourselves, and how we coexist. Luke’s sensitivity towards the positions of alterity is informed by queer politics. His artistic practice takes an intersectional approach, whereby people are neither singular nor isolated; bodies of difference can intersect, practice mutual listening, take responsibility for themselves and one another. A highly awarded and commissioned artist, in 2019 Luke received an Australia Council for the Arts Fellowship and his works ‘Bunny’ and ‘Still Lives’ (co-creations with Daniel Kok) were presented in the Venice Biennale and ‘Public Actions’ premiered at Arts House for Dance Massive. In 2020 Luke was appointed Artistic Associate of Temperance Hall.

Dr. Priya Srinivasan is the co-Artistic Director of Sangam: Performing Arts Festival of South Asia and Diaspora which enables a single platform for classical, contemporary and experimental forms. Priya is also the Co-Director of the South Asian Arts Pathways Program commissioned by Bunjil Place and Drum Theatre. She is a choreographer and writer who lives and works in the lands of the Wurundjeri and Boonwurrung people in Narrm, combining theory and practice to work towards social justice issues through art. Priya’s performances prioritise feminist decolonisation processes, making visible minority women’s voices, bodies and histories. Her experimental postcolonial work rooted in South Asian classical dance practice has been presented in major festivals and venues such as universities, museums, galleries, and theatres internationally in the USA, Europe, China, India and Australia. Her intercultural feminist collaborative work with First Nations artists, Churning Waters toured India for Australia Fest. She has curated and choreographed several projects in partnership with Hermitage Museum Amsterdam, Berlin Wall Memorial, Rockbund Art Museum Shanghai, Highways Theatre Los Angeles, Spaces Chennai, Shoonya Bangalore, DCA Darwin, Creative Victoria, MAV, Bunjl Place and Dancehouse. Currently she is developing a full length violence against women work “S3” with a women’s choir, juxtaposing a 3rd century poem about a multi armed weapon wielding warrior goddess with contemporary police reports about the rape and murder of women in the 21st century. In her dual career as artist/scholar Priya has a PhD in Performance Studies from Northwestern University, was an Associate Professor at the University Of California Riverside in Critical Dance Studies, and her award winning book “Sweating Saris: Indian Dance as Transnational Labour” is read and taught widely across the globe as a seminal work for dance studies.

Tam Nguyen has over twenty years of experience in large-scale festival management, documentary film, and the performing arts sectors in the UK, US and Australia. Most recently, she was Creative Producer of the Asia Pacific Triennial of Performing Arts (Asia TOPA). Prior to living in Melbourne, Tam was Festival Producer of the UK’s largest documentary festival and industry conference Doc/Fest; produced feature documentaries for international theatrical and television release for Academy Award nominated documentary film company Chain Camera Pictures (Los Angeles); was Producer for Pace Pictures on the Australia Week Festival (Los Angeles, New York) a joint initiative of the Department of Foreign Affairs and Trade, Austrade, Qantas and Tourism Australia. In Melbourne, Tam has been Executive Producer of the Australian Art Orchestra, Executive Producer of the late night programming for MONA FOMA, Producer of the 98th International Society for the Performing Arts (ISPA) World Congress. Tam has held programming roles with the Australian International Documentary Conference, Adelaide Festival of Arts, and the Department of Premier and Cabinet’s Thinkers in Residence program.