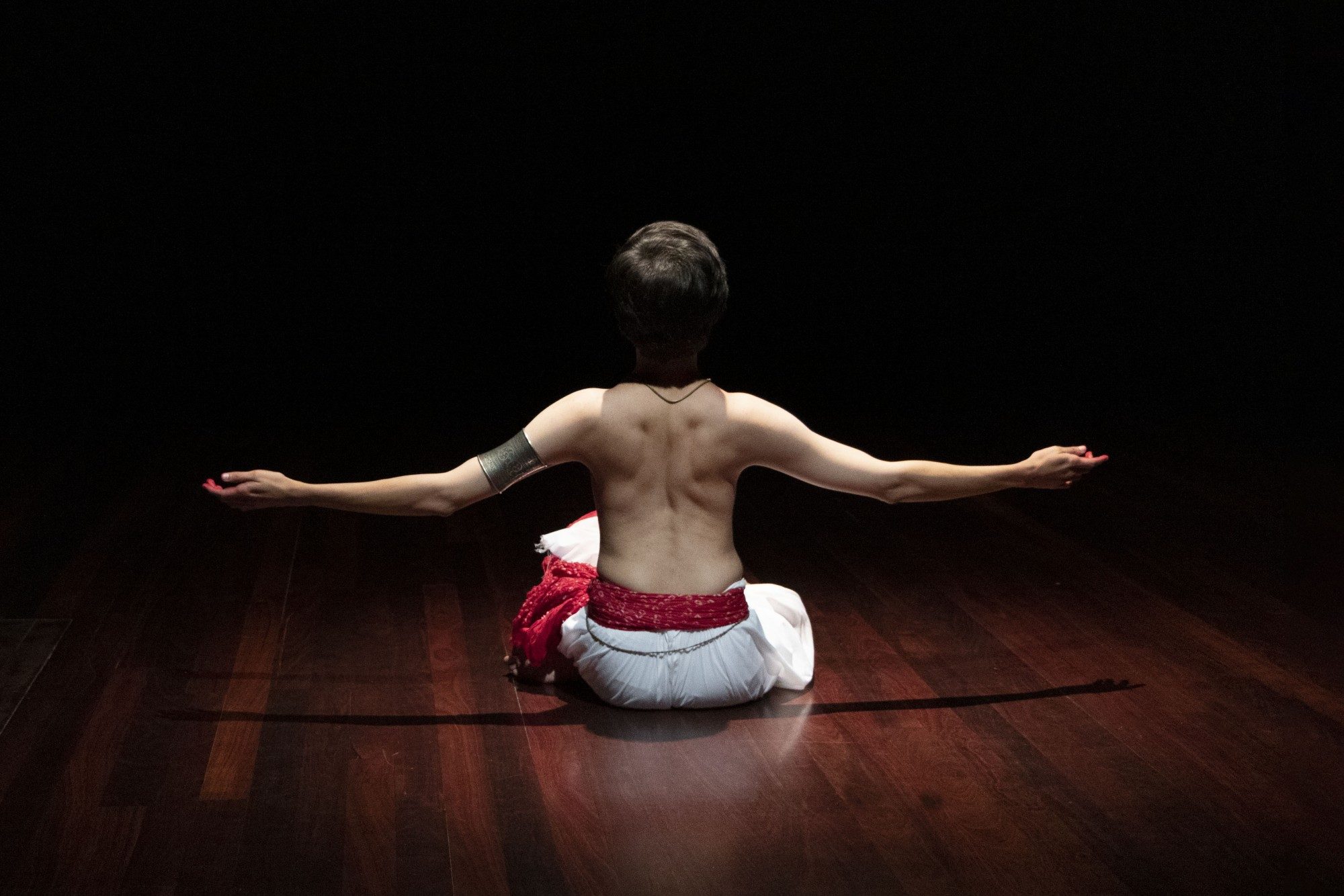 Sangam presents Rewa: The Unseen: a double bill, featuring two artists from Bangalore and Melbourne who use queering to question their classical dance forms on an experimental platform. This double bill features the world premiere of two exciting works that probe deep into form and power.

Masoom Parmar’s work Aaj Ke Naam looks at queering religious symbology embedded in the Bharata Natyam form to ask powerful questions about marginality and belonging from an Islamic perspective. Using songs of the Muslim poet Kabir and intertwining multiple theological systems of thought that form his own identity, Parmar offers a question from the margins about living and performing in India today as a queer, hybrid Muslim/Zoroastrian performing Hindu texts.

Devika Bilimoria is an award-winning visual artist and dancer who has learnt the steps of Alarippu, a succinct Bharat Natyam dance, entirely in reverse. Alakkala: the promise of a-dance, is a fragmented live-body and video performance which offers an alternate experience of Bharata Natyam through audio-visual repetition and time manipulation. It enlists reversal as a device to reorient in an attempt to reach the command, labour and haunting of encoded dance forms.

END_OF_DOCUMENT_TOKEN_TO_BE_REPLACED

Masoom Parmar: Hailing from a family of musicians, Masoom started training in Bharatanatyam at the age of 6 and gained a Vishārad degree in the dance form from Akhil Bharatiya Gandharva Mahavidyalaya. He further honed his skills under the legendary Guru Late Smt Jayalakshmi Alva and is currently under the tutelage of Sri Kiran Subramanyam & Smt. Sandhya Kiran. An intensive training backed with performances across the country only added to his experience and expertise. One of the few Muslim practitioners of Bharatanatyam, his dance is marked by his emotive skills, neat geometry. He has also had a brief training in Kathak, Odissi and Contemporary dance, thereby enriching his dance vocabulary. His dance is a ﬁne amalgamation of these styles and he aspires to create work that is honest, relevant and in step with the times now. He has choreographed and performed two full length solo pieces on the works of Meera and Kabir. His current research explores the works of
lesser known poetesses.

Devika Bilimoria (b.1985, Ba Fiji) is a Narrm/Melbourne based artist contributing to dialogues of shifting territories, bodies and cultures through practices of image making, performance and installation. Devika’s body-based investigations develop from a rigours training in Bharata Natyam and Oddisi at the Chandrabhanu Bharatalaya Academy of Indian Dance since 1995. This, in tow with both a Bachelor of Arts in Media and Fine Arts (Photography) at RMIT, has brought Devika to reconsider her experiences of post-colonial South-Asian classical dance and its construction of bodies in kin with video technology. Furthermore, her site-responsive video practice engages somatic receptivity, intra-action and tactility to the charged nexus of body/earth relations. Frequently exhibiting, Devika has presented various interactive and installation works, most notably MURTI (Mapping Melbourne 2019; also, Adelaide Fringe Festival 2016, Melbourne Fringe Festival 2015). Held at Testing Grounds and supported by Multicultural Arts Victoria, it saw a vibrant participatory contemporary reﬂection of a Hindu bathing ritual. Devika has been a ﬁnalist for the William and Winifred Bowness Photography Prize (2015,2018), for the Nillumbik Art Prize (2016, 2018), and, for the Macquarie Digital Portrait Award (2015) at the National Portrait Gallery, exhibiting her debut video art piece, An Arctic Time Signature, which arose from her time in Bafﬁn Island above the Arctic Circle in 2014. Devika has performed, written and co-devised several works alongside co-founders, Luna Mrozik-Gawler and Nithya Iyer, of the interdisciplinary arts collective L&NDLESS. These works have included a four-hour durational performance considering memories of place entitled H:O:M:E (2018), commissioned as part of the Mapping Melbourne, and an seven-hour durational live art work exploring communal grief and ritual entitled MOKITA (HillsceneLIVE 2017). Recently in 2018, Devika undertook the(HillsceneLIVE 2017). Recently in 2018, Devika undertook the Darebin Arts and Entertainment Centre’s RISK residency, where she challenged her embodied relationship to Bharata Natyam applying techniques of embodied and video reversal. In 2013, Devika Vice Chaired the Jambudvipa Association for Indian Arts (JAIA) – founded by Dr. Chandrabhanu OAM during which the ensemble of senior classical Indian dancers of JAIA performed the feature-length dance drama Mariamman at the aforementioned Darebin Arts Centre, with support from the Victorian Multicultural Commission and Multicultural Arts Victoria. Devika is currently a lecturer at Photography Studies College in Southbank, and works as a freelance photographer. 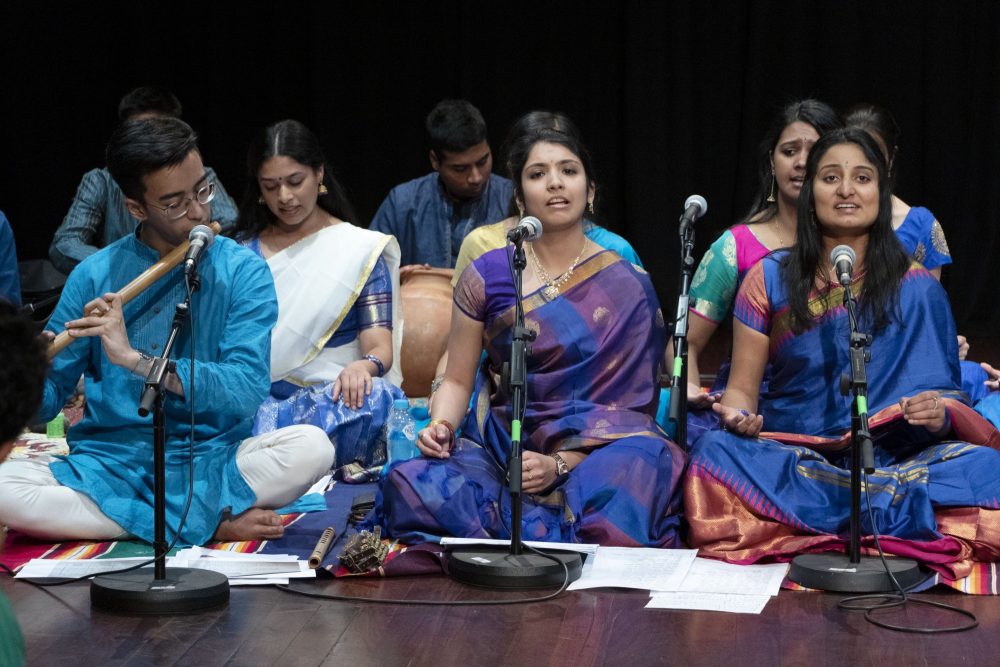 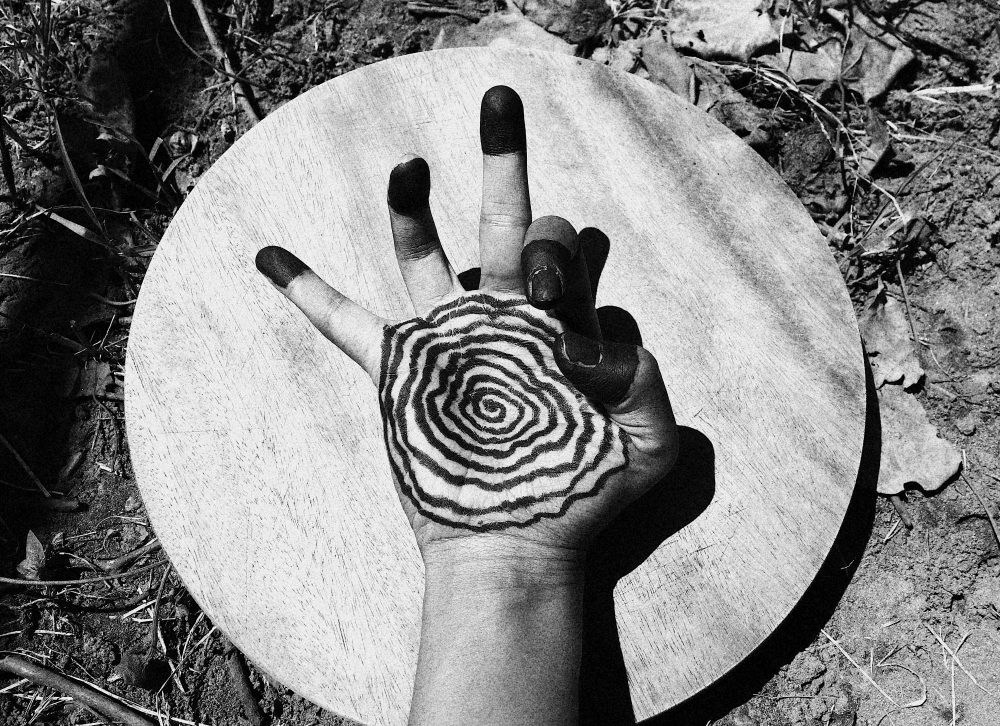