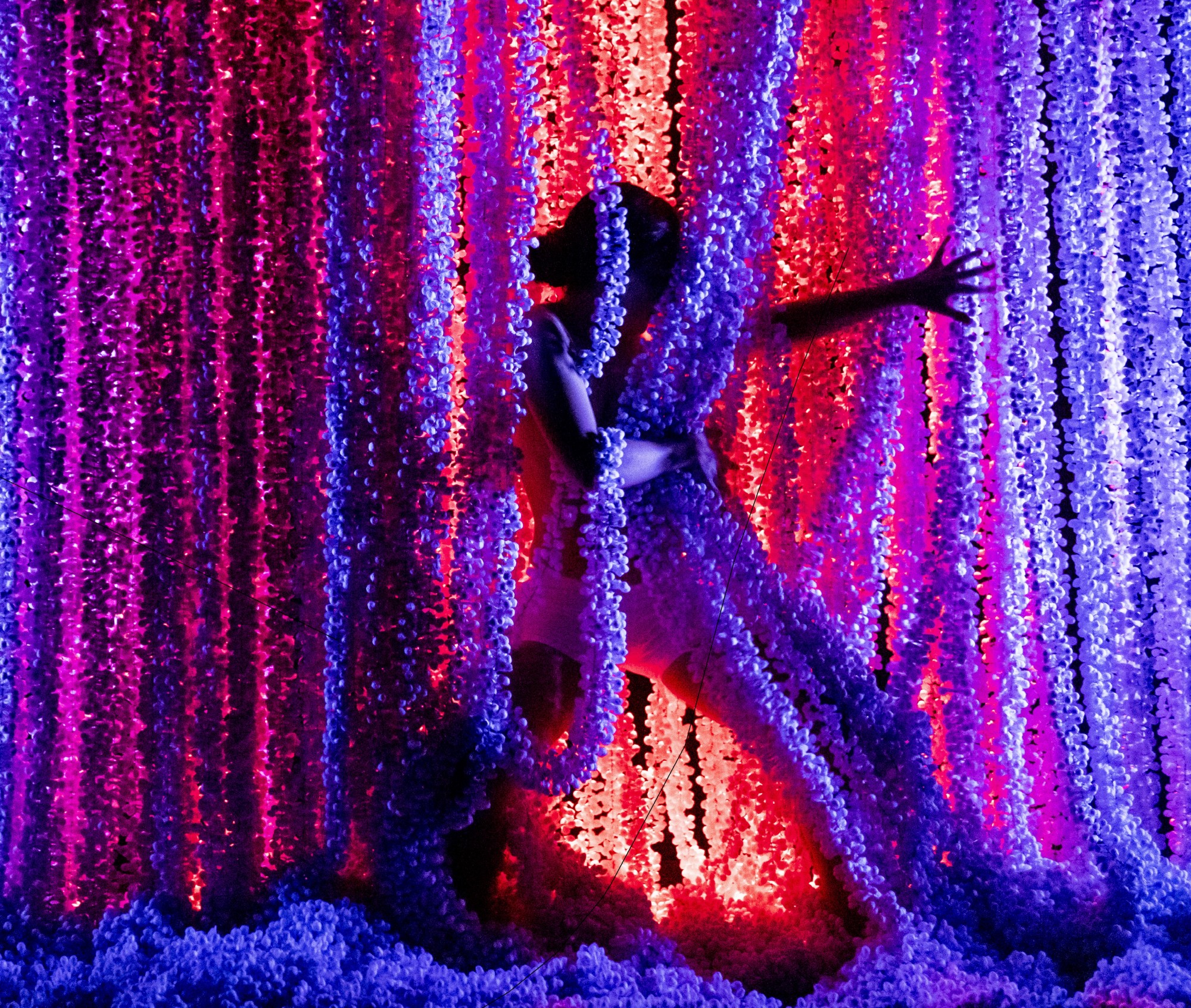 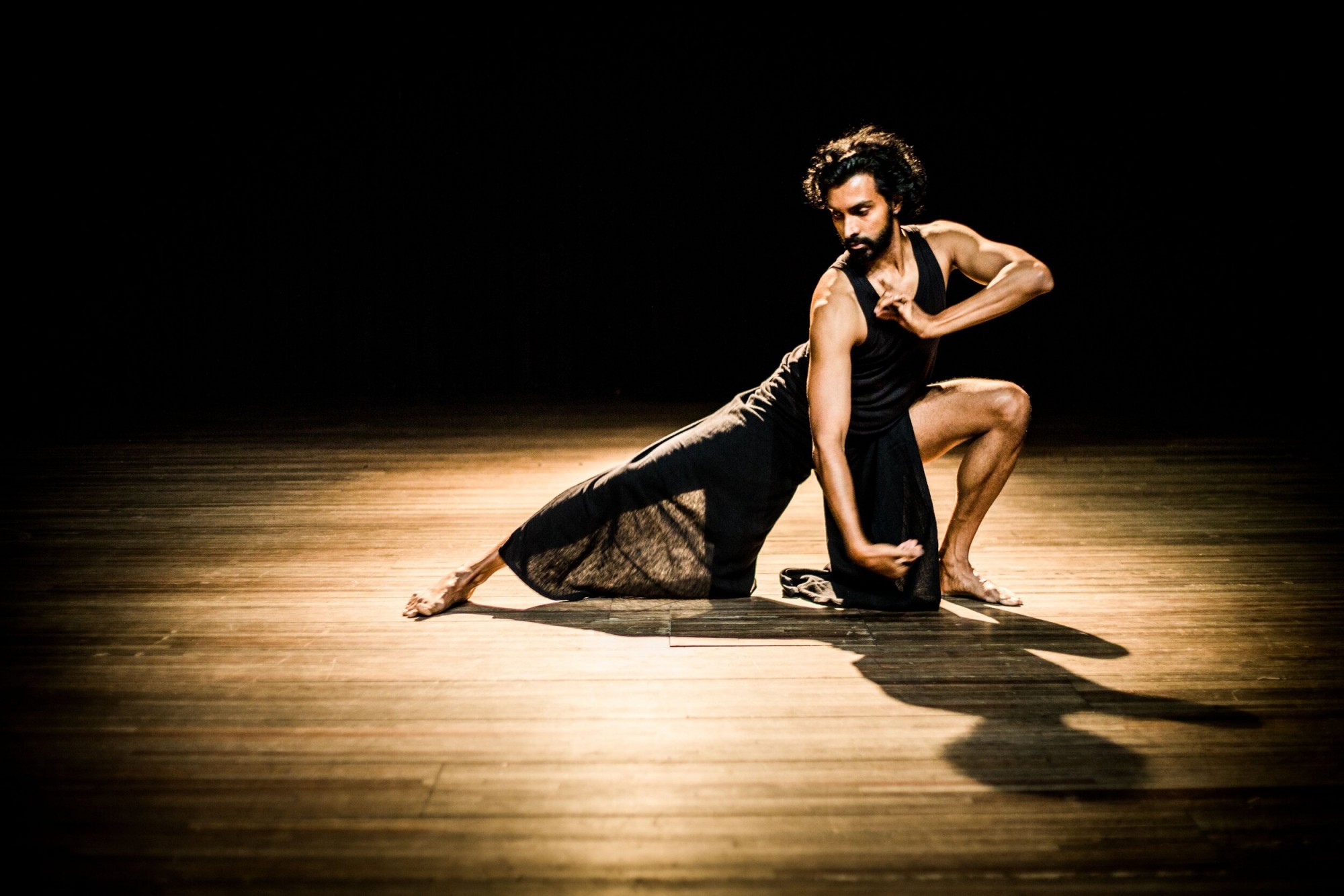 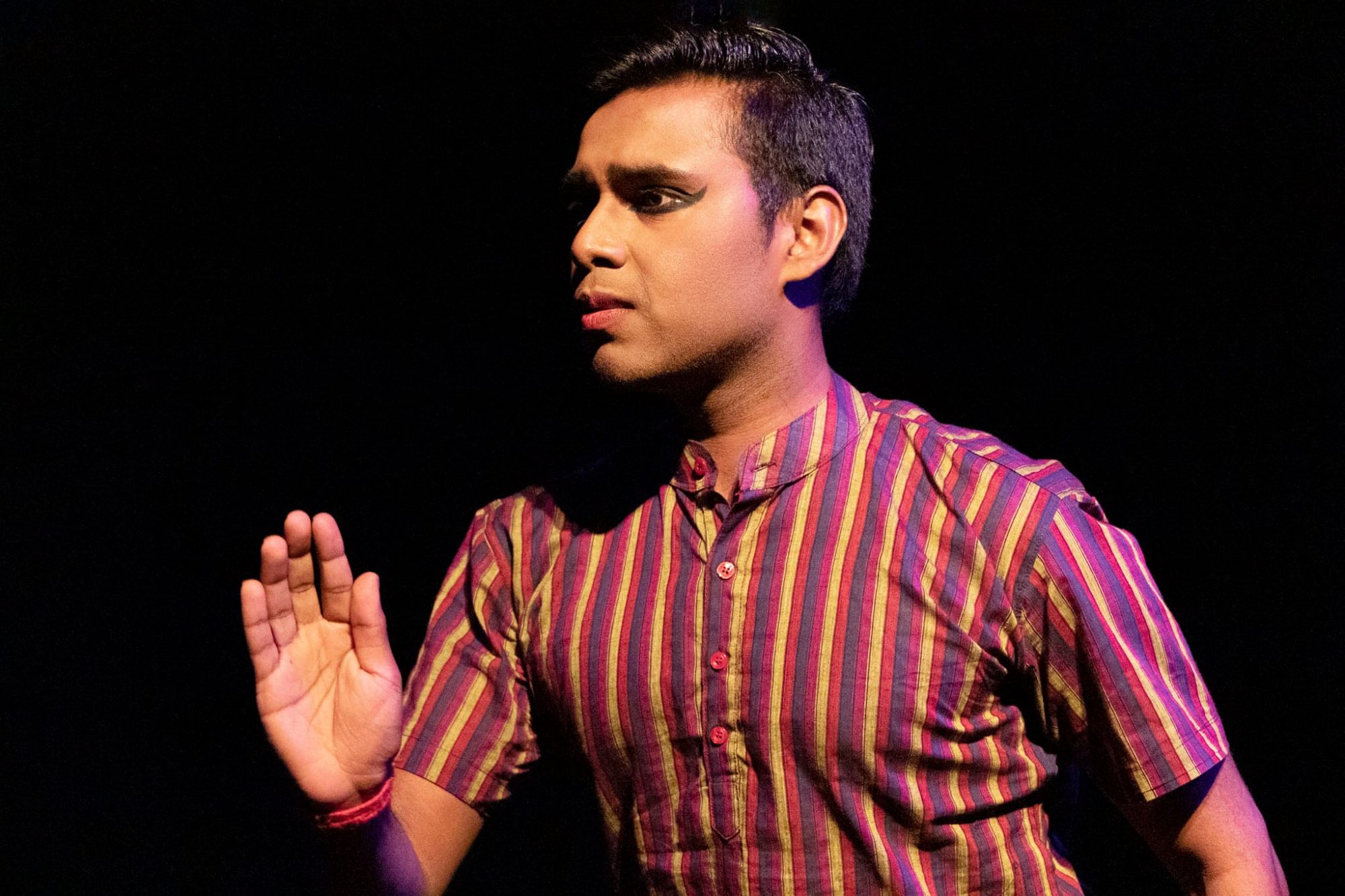 Now in its 3rd year, Sangam is a platform for emerging and established South Asian-Australian artists to learn, create and showcase art alongside globally renowned artists from the South Asian Diaspora. The Artistic Directors of the festival Priya Srinivasan, Hari Sivanesan and Uthra Vijay are excited about the opportunity to have 6 short commissions presented at Dancehouse in two triple bills each night. Over four jam-packed weekends, from February 20 to March 13 2021, and across four venues, Abbotsford Convent, The Drum Theatre, Bunjil Place and Dancehouse, this year’s festival features 100+ artists bringing an eclectic array of music, dance, spoken word, comedy, classical and experimental performances to the stage. Sangam is in partnership with MAV and guided by BlakDance.

In this session at Dancehouse, Sangam presents the second triple bill of newly created works by extraordinary South Asian classical-contemporary dancers. These artists were mentored by renowned dancers Priyadarsini Govind, Mavin Khoo and Dr. Chandrabhanu to create new works, which premiere at Dancehouse between March 11 and 13.

Shriraam Theiventhiran’s work Sacred Sensuality navigates the interplay of love, lust and religious sentiment through the classical dance medium. He asks “Is it improper, sinful even, to gaze at the Lord with thoughts of lust?”

Sooraj Subramaniam’s work Nimbus is a contemporary dance solo journeying into the internal conflicts humans undergo when their expectations, their dreams, their aspirations get broken, where the rain of a nimbus (a dark and amorphous cloud) serves as metaphor

Raina Peterson’s work Maya (excerpt) is an experimental solo dance work exploring Hindu conceptions of the self and the cosmos through a trans lens, and vice versa – exploring the trans experience using the frameworks of Hindu philosophy.

END_OF_DOCUMENT_TOKEN_TO_BE_REPLACED

Shriram Theiventhiran began his training under the tutelage of Renuka Arumughasamy (Melbourne). His passion for Bharata Natyam and fascination with its various styles had catalysed his thirst for further learning, taking him to Madras for intensive training under Dr. Sujatha Mohan. Shriraam is a regular performer during the s circuit and has danced in several productions as a freelance dancer. He is one of the very few dancers who are practitioners of Bharata Natyam, Bharata Nrityam and Karanas. Shriraam is the Artistic Director of Shri Nrityam. Having been influenced and inspired by Dr. Padma Subrahmanyam, Shriraam strives to connect and bring unity through diversity, by carving a path of harmony through the Arts. He is currently part of the ECP program of choreographers at Dancehouse for 2021 and working with Joel Bray.

Sooraj Subramaniam is versatile in Bharatanatyam, Odissi, Kathak, ballet and contemporary dance forms. He received early training at the Sutra Foundation, Malaysia, and later on at the Western Australian Academy for Performing Arts, Perth. His major credits include performing with SRISHTI, Akademi, Balbir Singh Dance Company and Shobana Jeyasingh Dance. Sooraj currently lives in Belgium, presenting solo work as well as collaborating with companies and independent choreographers. His own creations employ an organic amalgam of styles, and draws on traditional templates to produce work that is personal and reflective.

Raina Peterson is a dancer-choreographer who was born and raised on the lands of the Gunaikurnai people and is currently living and working on the lands of the Wurundjeri people. Raina draws on their training in mohiniyattam (classical dance of Kerala, India) to create experimental works exploring gender, sexuality, spirituality and time. With dance partner Govind Pillai, their full-length works include In Plain Sanskrit (2015), Bent Bollywood (2018), Third Nature (2019), Kāla (2019), Drishti (2020) and Maya (solo, upcoming).

Aneka Srinivasan has been learning Carnatic music under Smt. Jayshree Ramachandran since the age of 4. She completed her Arangetram in 2015 and has since developed her passion for Carnatic music further by performing both in Melbourne and during the Chennai December Season, for various organisations and sabhas. She is also a Postgraduate Psychology Student in Melbourne, Australia.

Pallavi Susarla trained under Dr Chandrabhanu at the Chadrabhanu Bharatalaya Academy and is an accomplished Bharata Natyam and Oddisi dancer as well as a Carnatic Vocalist. Pallavi has performed in numerous productions and in 2012 she received the Natya Kala Choodamani award for her contribution to stage management, teaching, vocal music, mentoring and nattuvangam. Pallavi continues to develop and follow her passion for the arts.

Maiyuren Srikumar is a violinist and composer who has been trained in both Classical Western and Carnatic music. He has made appearances on Sri Lankan national TV and radio as an upcoming Fusion artist who composes music with a unique blend of western and eastern cultures. He is also the founder of a sought after Melbourne based band performing in a range of public and private events. Aside from his contemporary works, Maiyuren regularly performs in Carnatic concerts and has also established himself in Melbourne as a versatile classical performer. 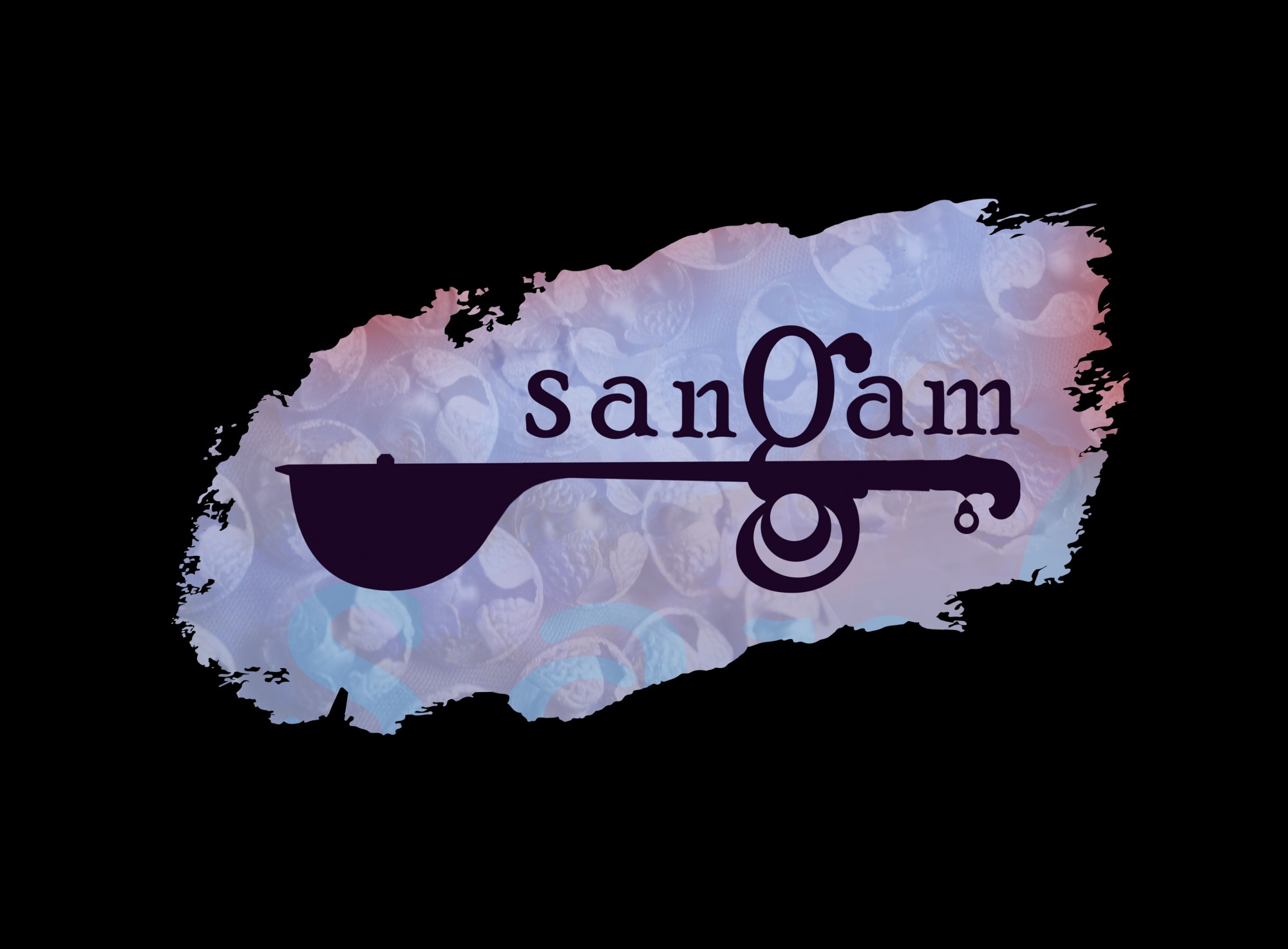 Sangam is a proud partner of MAV and are supported by Creative Victoria, Australia Council for the Arts, City of Melbourne, City of Greater Dandenong and Yarra City Council. Sangam venue partners are Dancehouse, Abbotsford Convent, The Drum Theatre and Bunjil Place. Sangam has been guided by Blakdance and supported by Ausdance Victoria, Peril Magazine and SouthAsian Today. 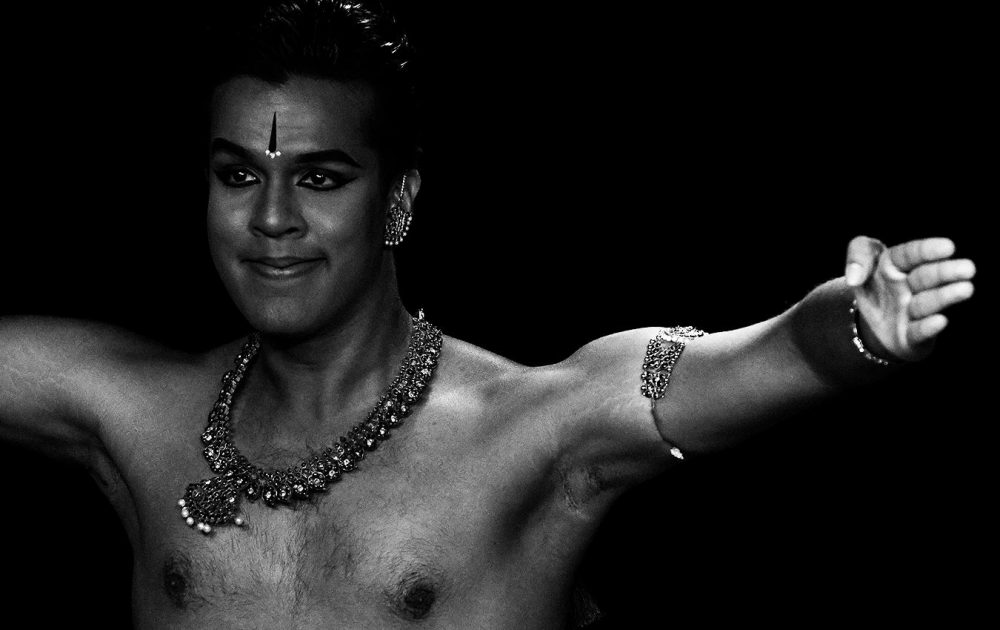