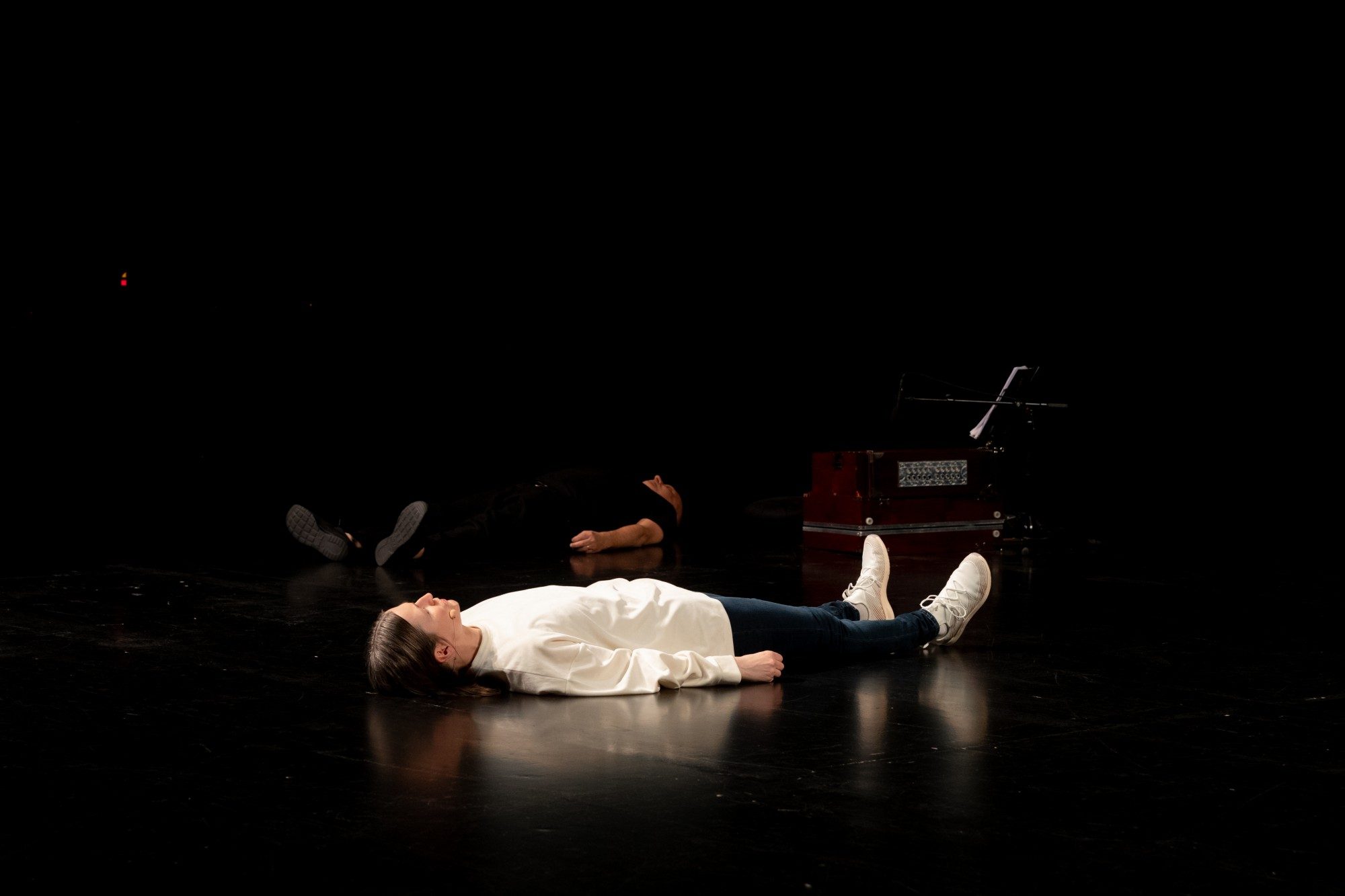 Penelope Sleeps is an indirect reference to the figure of Penelope, the wife of Odysseus, who waited for her husband for years while he travelled the world and waged war, and who, in the meantime, also kept a large number of suitors at bay. Like the tale of the small spider that Edvardsen recounts, Penelope was a weaver (etymologically, the Greek word pēnē refers to ‘weft’). However, every night she would unravel the result of her work in order to start over again. The performance mimics working-without-an-outcome: Penelope Sleeps is, according to its subtitle, an opera, but besides being about the idea of musical theatre, it is about the notion of operating, of writing or performing — like the weaving of a text that is constantly beginning to fray.

Penelope Sleeps strings together fragments of very divergent stories — a fragile unfinished tapestry of voices, a linguistic resonance chamber in which the figures of Penelope and Odysseus remain as vague as a dream from which one has just awakened.

END_OF_DOCUMENT_TOKEN_TO_BE_REPLACED

Mette Edvardsen‘s work is situated within the performing arts field as a choreographer and performer. Although some of her works explore other media or other formats, such as video, books and writing, her interest is always in their relationship to the performing arts as a practice and a situation. She has worked for several years as a dancer and performer for a number of companies and projects, and has developed her own work since 2002. She presents her works internationally and continues to develop projects with other artists, both as a collaborator and as a performer. A retrospective of her work was presented at Black Box theatre in Oslo in 2015, and the focus program Idiorritmias at MACBA in Barcelona in 2018. Her project Time has fallen asleep in the afternoon sunshine is ongoing since 2010, and has its base now at the headquarters of osloBIENNALEN FIRST EDITION 2019 – 2024 in Oslo. Edvardsen is structurally supported by Norsk Kulturråd (2017 -2020), BUDA Arts Centre Kortrijk (2017 – 2020) and apap-Performing Europe 2020 – a project co-funded by Creative Europe Programme of the European Union. She is associated artist at centre chorégraphique national de Caen en Normandie (France) for the period 2019-2021. She is currently a research fellow at Oslo National Academy of the Arts. Edvardsen is a 2020 Keir Choreographic Award Jury member.

Matteo Fargion was born in Milan in 1961 and is currently based in London. He studied composition with Kevin Volans and Howard Skempton. His interest in contemporary dance began in the late 1980s when he saw the Merce Cunningham Dance Company perform at Sadlers Wells in London.  This experience encouraged him to apply for the International Course for Choreographers and Composers, where he first wrote music for dance, and through which he met the choreographer Jonathan Burrows, with whom he has collaborated for 30 years. Fargion has also written music for theatre, mainly in Germany,  for several productions directed Elmar Goerden, and Thomas Ostermeier at the Schaubühne Berlin. He has collaborated with many choreographers including Siobhan Davies, Russell Maliphant, Lynda Gaudreau, Noé Soulier and Mette Edvardsen (Oslo)   In 2017 he was commissioned by the Berlin based dance company Dance On, to make their debut piece, 7 Dialogues, which toured widely. Fargion is active as a teacher and, apart from leading several workshops each year,  is a long-time visiting member of faculty at P.A.R.T.S, the school of Anne Teresa De Keersmaeker in Brussels. He has developed an approach to teaching composition to choreographers, set within a framework of music practice but also built on his wealth of experience as a performer. Recent work includes The Solo Piece, a dance solo for himself, premiered at the Labor Sonor Festival in Berlin in December 2018, a collaboration with Karl Jay Lewin on the  dance quartet Extremely Pedestrian Chorales, writing music and performing inClaire Croize’s Flowers (we are), and We Have to Dress Gorgeously, a punk opera made with Andrea Spreafico for the Borealis Festival Bergen.  His second collaboration with Mette Edvardsen, Penelope Sleeps, premiered at the Kunsten Festival Brussels in May last year.