That Which Was Once Familiar 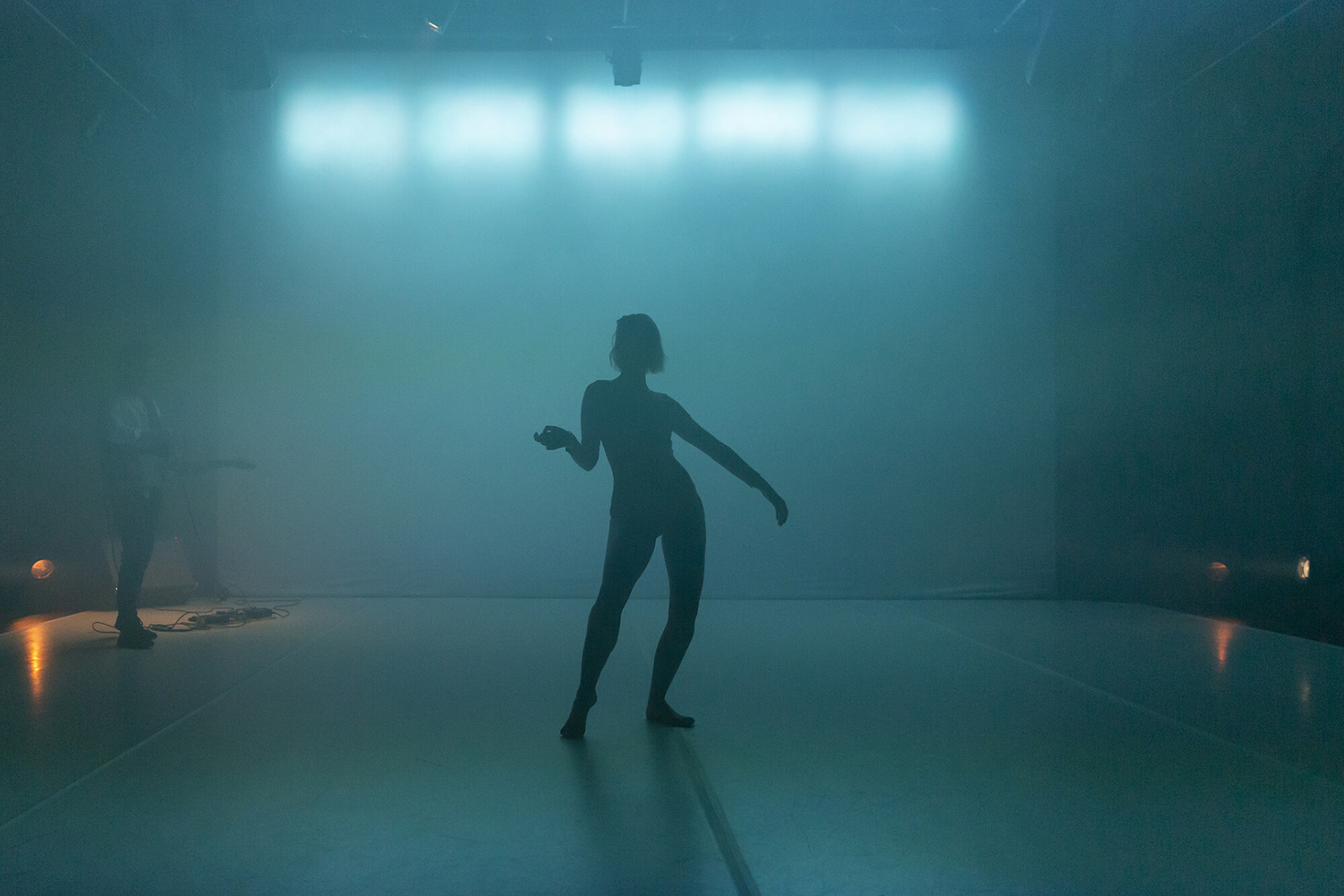 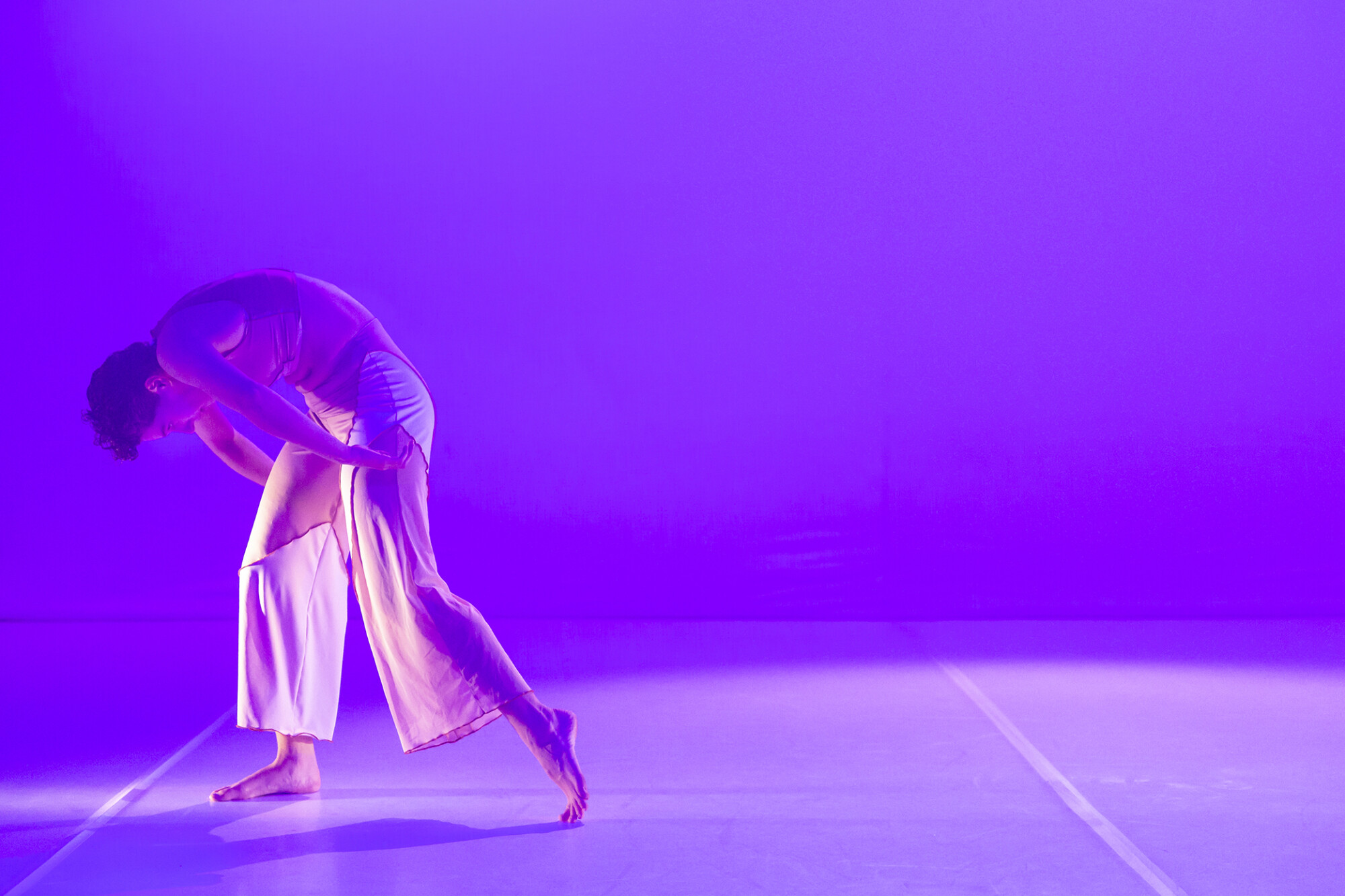 That Which Was Once Familiar (TWWOF) investigates how culture inscribes gender and sexuality onto the flesh sacks we walk around in… our bodies. Zoë Bastin combines movement with sculpture as dancers explore the abstract, object-like parts of themselves such as the form, weight, scale and shape of how they move. Deviating from the ways they are expected to perform, they find new ways to become bodies that are less familiar.

That Which Was Once Familiar engages choreography and sculpture to ascribe agency to performing bodies by rebelling against the way society often objectifies women. By focussing on what a body is capable of no matter what orientation, gender, age or ability, the use of scored movement, live and recorded music and improvisation are employed in the pursuit for freedom and autonomy beyond outdated societal constraints.

END_OF_DOCUMENT_TOKEN_TO_BE_REPLACED

Zoë Bastin is an artist, curator, sometimes writer and self-described rat-bag. As an artist who makes performances, sculptures, videos, photos and runs a radio show she’s fascinated by the porousness of the body, where it starts and ends and how culture inscribes ideas of gender and sexuality onto our physical form. Since childhood she has been fascinated by gender roles in dance class; particularly who’s allowed to do what and why.

Sue Hockey has been a professional dancer for over fifty years. She began her dance experience under the tutelage of her mother, Dorotea Mangiamele, founder of Mangala Creative Dance. For 10 years she worked as a Pre-School mothercraft nurse for Melbourne City Council. She continued with yoga and creative dance training, while freelancing at John St Community early Childhood co-op. From 2006 Sue became Principal of the Children’s section of Mangala Studios. She has lectured in children’s dance teaching to Pre-School educators and has worked with several Montessori kindergartens. She is currently teaching at Croxton Uniting Church (Thornbury) as well as offering educative incursions at primary and preschool institutions.

Alice Jefimenko is an artist living and working on the unceded lands of the Kulin Nations, Al loves to explore the ways physical places communicate expectations, qualities, relationships and experiences. Al uses painting, dance, theatre, and the written word and is most interested in working collaboratively across mediums and modalities and producing diverse thematic work. In recent times Al was involved in The Golden Scissor Puppets show Anthropocene as a dancer; as choreographer and dancer for The Body Speaks; as choreographer for the VCA Master’s Program student production of Dog Park; and as dancer for Emma Fawcett’s VCA Masters Program development piece Rhonda.

Hayley Does is a contemporary dance artist currently based in Naarm/Melbourne. She trained at the Victorian College of the Arts studying a Bachelor of Fine Arts (Dance), where she worked with leading Australian choreographers such as Sue Healey, Prue Lang, Stephanie Lake, Alisdair Macindoe and Larissa McGowen. She performed ‘Heretofore’ by Anna Smith at Centre National de la Dans in Paris (2019) and presented at Out Of Bounds (2021) supported by Lucy Guerin Inc. and Phillip Adams Balletlab. In 2021 Does was the youngest recipient of a Frankston City Creative PD Grant, enabling her to partake further study through the University of Arts London, under Damien Borowik, in Creative Coding.

Tizana Saunders grew up in South Australia, where most of her family were horseriders. Her passion for dance led her to successfully audition for the Australian Ballet School Interstate program, which saw her in Melbourne for intensive training annually. Eventually she moved to Melbourne to attend the Australian Ballet School full time. After Tizana finished her training she moved to London and continued to further her skills training with world renowned dancers, including principal dancer Zenaida Yanowsky. Recently Tizana has been expanding her practice beyond ballet, bringing a new perspective to dance and expanding the possibilities of what it can bring to performers and audiences alike.

Julia Luby’s practice meets performance, dance and sculpture. With a background in classical ballet, they work to question preconceived notions when it comes to dance and movement, and to slowly unlearn the value system that such a strict art form produces. Primarily using their own body as medium, Julia’s work is also concerned with representations of the female body. Through this interest comes a desire to explore the relationship between performance work and documentation. Much of Julia’s performance work is presented in a ‘trace’ form, with no physical body present either in the flesh or in its document, rather looking to objects or sculptural forms as a record.

Grace Ferguson is a Pianist, Composer, Sound Designer and Piano Teacher who is based at Eastmint studios on Kulin nation land. Her dynamic yet intimate works draw from her Classical music training but also significantly depart from this genre through her interest in non-western traditions of music, integration of low-fi electronics and love for improvisation; “to play without inhibition or apology for what results from this lack of inhibition”. In live contexts, Grace is primarily interested in creating reciprocal listening experiences between herself and the audience rather than performing at them. In June 2020, her debut solo piano LP Voler (Music Company) received worldwide critical acclaim and reached #4 on AIRs Independent Music Charts. Grace has also contributed to a number of new Australian theatre, dance and film projects including an extensive tour with the multi-award winning, We All Know What is Happening by Samara Hersch and Lara Thoms; a devised theatre work that examines Australia’s relationship with the Republic of Nauru, performed by seven children/activists.

Byron Meyer is an architect and musician who seeks to find and explore the ways these two viewpoints and practices can inform one another. Working with electric guitar as a primary medium of musical experimentation and expression, Byron is one half of the band Water Signs, as well as a composer and live performer of pieces for moving image, exhibitions, performances and other events. Resonance and responsiveness are key to Byron’s creative interests. He looks to approach the guitar and its various paraphernalia as found material artefacts that offer a specific opportunity to play with certain physics and characteristics of sound, rather than as means to render a prescribed musical score. Improvisation, as well as the live creation of sound through semi-acoustic instruments (without pre-recorded samples or tones) is an important part of this practice. Electronics are used to modify and augment sound, but every element is borne of a physical, haptic gesture, visible and perhaps informed by others nearby. The vital catalyst is thus the body’s interaction with objects in the given time and space shared with an audience and other performers—an event that somehow folds in whatever traits and energies may be present in that moment. The underlying intention in this is to yield a richness of aural and interpersonal expression, while also generating a collective experience that is authentic, unpredictable, and immediate.

Natasha Phillips is an independent Creative Producer based in Narrm (Melbourne) and currently a producer with Performing Lines. Her focus is producing across multiple forms of contemporary experimental performance with a strong engagement with the Chinese speaking region. She is currently being mentored by Erin Milne (Bureau of Works) as part of the Victorian Independent Producers Initiative Mentorship Program and has produced for organisations such Arts House and ArtPlay. Natasha was most recently an Associate Producer at Arts Centre Melbourne between 2018-2020. She has been a participant on the Australia Council Future Leaders Program (2017), the inaugural Women In Theatre Program at Melbourne Theatre Company (2016), the Emerging Cultural Leaders Program at Footscray Community Arts Centre (2015) and has been a recipient of an Australia Council career development grant and a Ian Potter Cultural Trust grant.

Josephine Mead is a visual artist, writer, curator and arts-worker based in Naarm (Melbourne). She works through photography, sculpture, installation and writing to explore personal notions of support. She has exhibited widely, locally and internationally, and has undertaken residency programs in rural Victoria (the Macfarlane Fund Residency), Mexico (the Arquetopia Foundation Residency), Turkey (the Tasarim Bakkali TAB Residency), Portugal (the Cortex Frontal Residency) and Germany (the ZK/U Residency). She is the Chair of Artistic Directors for BLINDSIDE Gallery, co-founder of Co- Collaborative Publishing and a current studio artist at Collingwood Yards.

Molly Stephenson is an environmental artist, writer and curator based in Naarm/Melbourne, Australia. She has just completed her Bachelor of Fine Arts (Honours) (First Class) at Monash University, and has completed her Bachelor’s of Fine Arts at the Victorian College of the Arts (VCA) in 2019. Primarily working within sculpture, installation, painting and text, she interrogates the interplay between the manipulation and natural mutation of the botanical, object and marine world. Molly has exhibited at galleries such as SEVENTH Gallery, No Vacancy Gallery, and Buxton Contemporary, with an upcoming show being held at Alternating Current Art Space, GAFFA Gallery and Canteen Studios. She has published with SEVENTH Galleries Emerging Writers Program and Heart of Heart’s Press, and is the founder and co-curator of the online exhibition, Quivering in Quarantine. She has been an active volunteer with SEVENTH Gallery for over 4 years, and has just begun volunteering at Connors Connors Gallery in Fitzroy’s Town Hall in 2021. Molly has been longlisted for Hatched 2021: National Graduate Showcase,  awarded the COVID-19 Quick Response Grant from The City of Melbourne, the NGV’s Women’s Associate Award, an Individual Creative Grant from The City of Boroondara, as well as the John Vickery Scholarship with The Victorian College of the Arts (VCA).

'That Which Was Once Familiar' is presented by Dancehouse and Bus Projects in association with Midsumma Festival with support from Yarra City Arts. 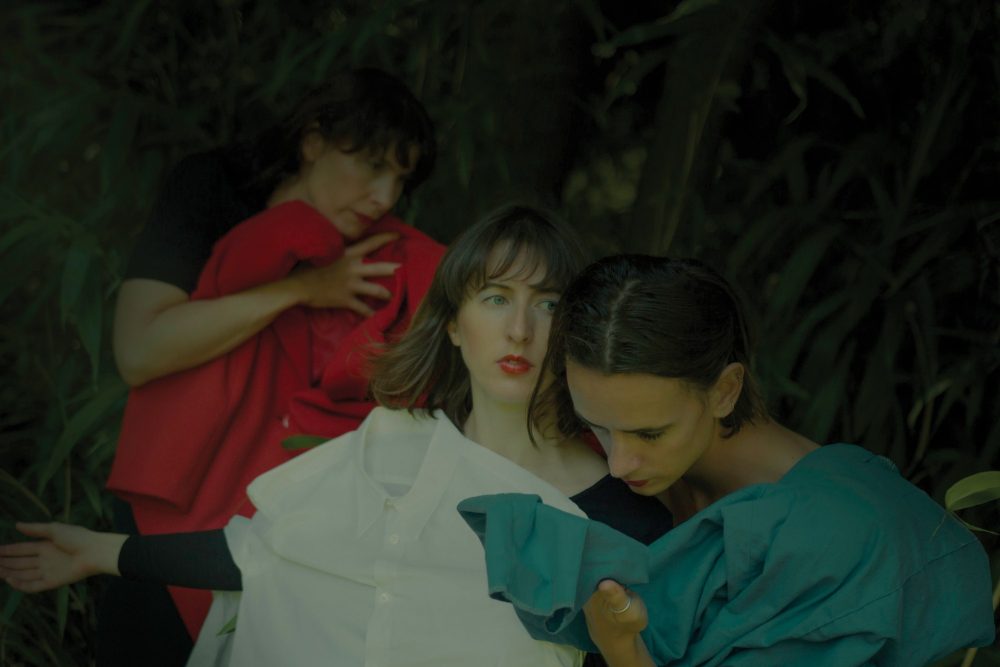 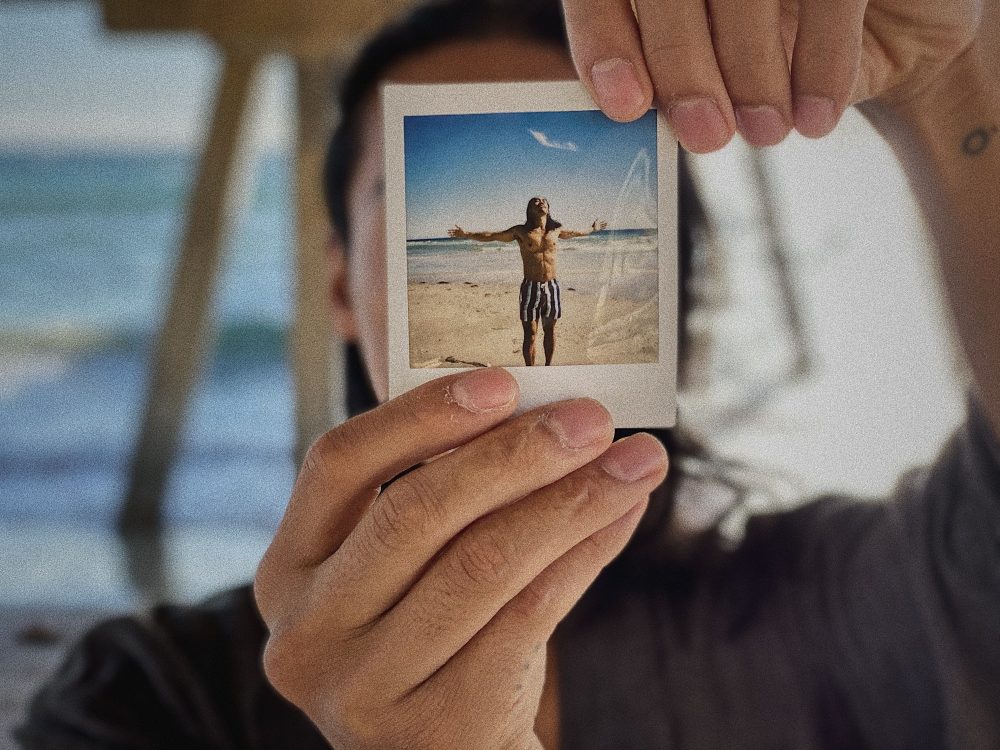