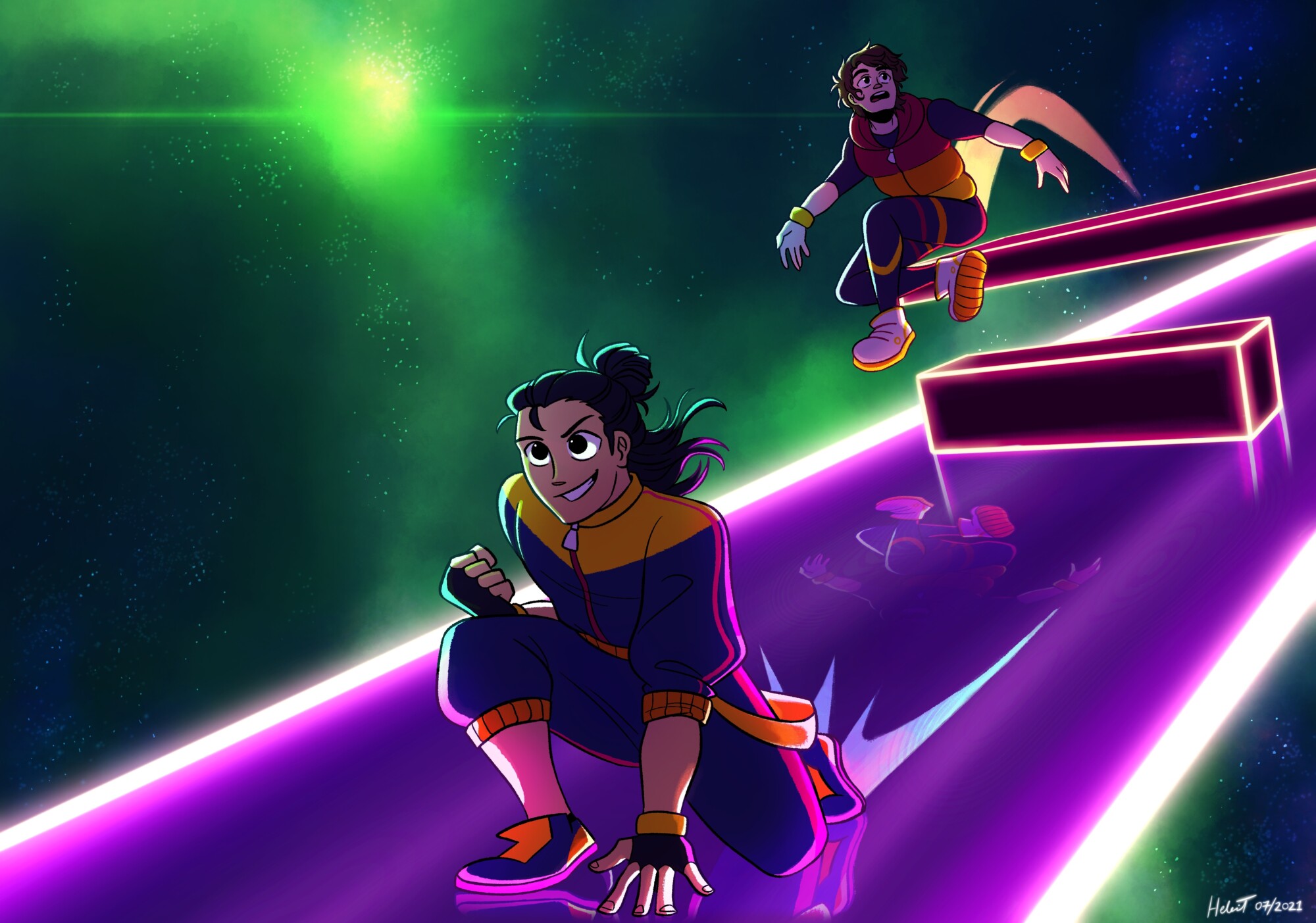 BeatStorm is a collision between a video game and a movement performance. Motion capture devices track and project two players into a virtual world in real-time as they travel along a fast-moving path set to high-energy electronic dance music evocative of video gaming. In each level, players must dodge a barrage of obstacles and collect items by physically moving; there is a one-to-one correspondence of movement between the real and the virtual.

Inspired by games like Dance Dance Revolution, BeatStorm is a rhythm game requiring rigorous, sequenced movement to survive and to achieve a high score. Yet the virtual world rarely demands any specific shape or form, it is up to the players to plan or react to the game’s geometric offerings with movement that will lead to the players’ success.

BeatStorm will be performed by Chris and Nasim, where they will attempt to reach the end of the game, preferably with a high score. The space will then be opened for eager audience members to have a turn at playing the game.

END_OF_DOCUMENT_TOKEN_TO_BE_REPLACED

Chris Chua originally completed a Bachelor of Science at Monash University. He went to his first dance class in 2010, as something completely different, and eventually studied contemporary dance at Deakin University, graduating in 2016. He has been part of collectives such as Yellow Wheel, YW2 and created works like TwitchPlaysChris (2015), our bubble (2018) and fragmental (2018). He has worked with makers such as Alisdair Macindoe and Nana Biluš Abaffy. Chris currently works as a freelance computer programmer. At the moment, his practice consists of experiencing many different approaches and ideas, not necessarily movement-related and imagining novel syntheses of these ideas. He works a lot with technology, because he can. At the intersection of this is a mashup of video and physical games and what makes them fun.

Nasim Patel is a Birarrunga based artist. He began his performance and dance practice at QL2 Centre For Youth Dance on Ngunnawal land in Canberra. Nasim completed his BFA (Dance) at the VCA in 2018. Upon graduating, Nasim was awarded the Dr Phillip Law Travelling Scholarship and travelled to Stockholm to study with choreographer and filmmaker Gunilla Heilborn. In 2019, he performed in Jo Lloyd’s Garden Dance, Rachael Wisby’s Please Do Not Move and Damian Meredith’s Human Patterning. In collaboration with Rachael Wisby, Nasim created The Curtain Drops (the jig is up) for the University of Melbourne through the First Commissions program. Nasim is an artist who exists within conflictions of identity. His work explores using semantics as a vessel to address topics of politics, art and nihilism. His practice heavily engages with the virtual, exploring the act of escapism through the digital realm.

BeatStorm was first created for Submerge as part of Dancehouse's Emerging Choreographers Program 2020.